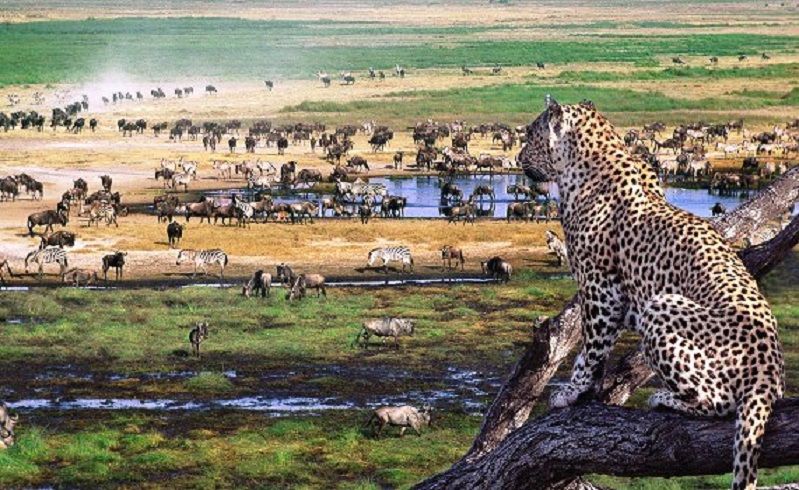 From Nairobi you will proceed to Amboseli National Park and view Kilimanjaro Africa’s peak and elephants, buffalo, impala, lion, cheetah, hyena, giraffes, zebra and wildebeest. Then proceed to Lake Manyara, Serengeti Park, Ngorongoro Arusha then back to Nairobi
One of the most requested events in the migration is the arrival crossing of the Mara River that occurs around late July to August with parts of September and again on their return south, around the last two weeks of October through early November. These are the best times to track and see the annual wildebeest migration in Masai Mara. While the sight of masses of animals thundering across the open plains is spectacular, the Mara River crossing will take you through a range of emotions – awe, anticipation, heartache, inspiration, excitement and much more.

Day 1 :
Nairobi – Amboseli
Depart Nairobi at 0800 hrs and travel to the Amboseli National reserve at the foot of snowcapped Mt. Kilimanjaro, Africa’s highest peak. Arrive in time for lunch. Afternoon game drive is taken. Dinner and overnight at Amboseli Serena \ Similar Lodge Amboseli National park offers some of the best opportunities to see African animals because its vegetation is sparse due to the long dry months. Amboseli National Park is home to wild animals, which include the African elephant, buffalo, impala, lion, cheetah, hyena, giraffes, zebra, and wildebeest among other African animals. There is also a host of Kenya birds, both large and small, to see if you keep your eyes open and stop at every sighting.
Day 2 :
Amboseli National Park
A full day in this photogenic park. Morning and afternoon game drives Dinner and overnight at Amboseli Serena \ Similar Lodge
Day 3 :
Amboseli Lake Manyara via Namanga boarder
Early breakfast then proceed for morning game drives exit the park and, we drive into Tanzania via the Namanga border. We also pass through Arusha to Lake Manyara National park with lunch enroute.and proceed to lake manyara National park Diner and overnight at Manyara Serena \ Similar Lodge
Day 4 :
Lake Manyara National Park
Early morning game drives then return to the lodge for breakfast .Depart the lodge and proceed Serengeti passing through Olduvai Gorge, the archeological site of the Leakey family. Meals and overnight at Serengeti Serengeti Serena / similar Lodge Lake Manyara National Park offers varied ecosystems, incredible bird life, and breathtaking views. Its ground water forests, bush plains, baobab strewn cliffs, and algae-streaked hot springs offer incredible ecological variety in a small area, rich in wildlife and incredible numbers of birds. The park provides the perfect introduction to Tanzania’s birdlife. Over 400 species have been recorded, and even a first-time visitor to Africa might reasonably expect to observe 100 of these in one day. Highlights include thousands of pink-hued flamingos on their perpetual migration, as well as other large water birds such as pelicans, cormorants and storks. The Park has a large elephant population and is most famous for its tree-climbing lions. It is, however, a myth that this is unique to Manyara, as lions regularly climb trees throughout Africa. It is possibly most notable here as the large concentration of game and density of the vegetation make climbing a tree an opportunity to escape getting in the way of the elephants!
Day 5 :
Lake Manyara Serengeti
Early morning game drives then return to the lodge for breakfast .Depart the lodge and proceed Serengeti passing through Olduvai Gorge, the archeological site of the Leakey family. Meals and overnight Serengeti Serena \ Similar Lodge
Day 6 :
Serengeti National park
Full days in Serengeti dedicated to morning, mid-morning and afternoon game drives. All meals and overnight Serengeti Serena \ Similar Lodge Serengeti is Tanzania’s largest and best-known national park, with a massive concentration of migratory animals that move around the park according to the availability of food. Serengeti is believed to hold the largest population of lions in Africa due in part to the abundance of prey species. The park also supports many further species, including cheetah, Thomson’s and Grant’s gazelle, topi, eland, water buck, hyena, baboon, impala, African wild dog and giraffe. The park also boasts over 400 bird species, including ostrich, secretary bird, Kori bustard, crowned crane, marabou stork, martial eagle, lovebirds and many species of vultures. This park is known as one of the best wildlife sanctuary in the world.
Day 7 :
Serengeti Ngoro Ngoro Crater via Olduvai Gorge
After an early breakfast, we drive south to the magnificent Ngorongoro crater via Olduvai Gorge with picnic lunches. Based on fossil evidence found at the Olduvai Gorge, it is known that various hominid species have occupied the area for 3 million years The annual wildbeest and zebras migration passes through the Ngoro Ngoro Conservation , with moving south into the area in December and moving north in June. This movement changes seasonally with the rains, but the migration will traverse almost the entire plains in search of food. The has a healthy resident population of most species of wildlife, in particular the Ndutu Lake area to the west has strong cheetah and lion populations. Dinner and overnight at Ngoro Ngoro Sopa Lodge
Day 8 :
Ngoro Ngoro Arusha -Nairobi
After breakfast depart for Arusha arriving by lunch time.

Kenya 3 Days
$ 370
3 Days Amboseli National Park Safari Holiday takes us to Amboseli national park which has captivated international attention with its free-roaming giant elephants along with...
View Details
Available through out the year:

Kenya 7 Days
This is a unique seven days safari covering the best parks and reserves in Kenya, in this safari you will get a chance to see...
View Details
Available through out the year:

Kenya, Tanzania 7 Days
Experience the wild of the Mara in Kenya with the combined the cultural, beach experience of Zanzibar
View Details
Available through out the year: